Opera Hunter, committed to presenting Opera and Music Theatre to the Hunter and beyond since 1986 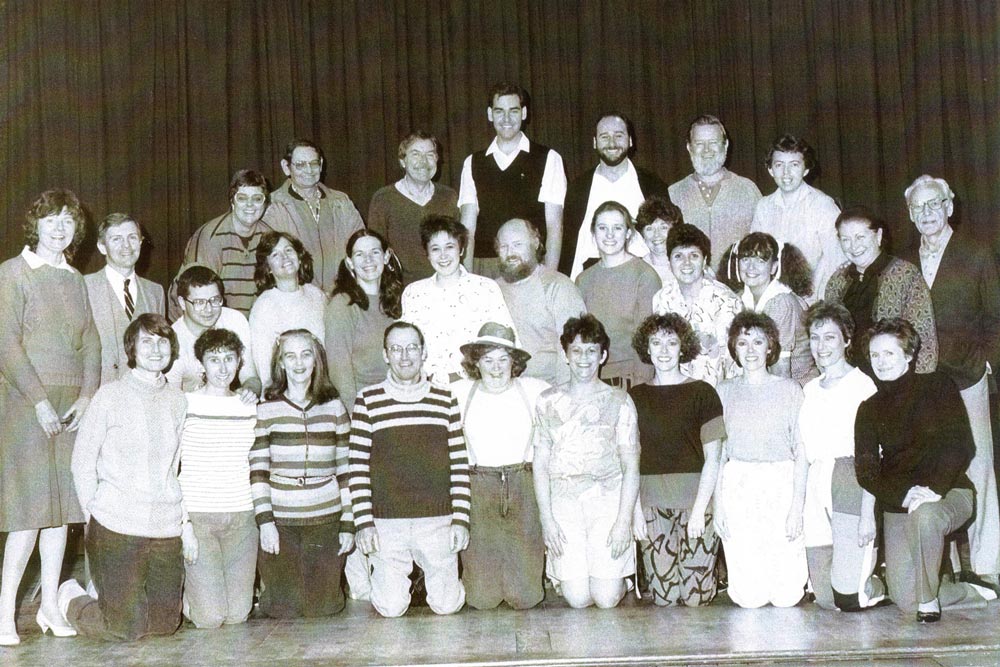 Our very first Workshop in 1987

Opera Hunter was formed in 1986 by a team including Mercia Buck as President, Colleen Potts, Tom Naisby, (the Newcastle Herald music critic) , Susan Hart, Karen Hawkins (now Walmsley), Philip Sketchley, Barry Walmsley and Rob Langley. It was then called Hunter Opera, a name which many still use. An early patron of the company was Rosina Raisbeck.

After fundraising and planning, workshops were held at Newcastle High School in 1987 and directed by Alan and Janice Light.

In June 1988, the company presented Act 1 of each of Julius Caesar by Handel, and La Traviata by Verdi under the direction of Mary Louise Ambler. The venue was the Belmont 16 foot club, and it was sponsored by Lake Macquarie Music Society.

There followed a busy nine years under the helm of president Colleen Potts. 1989 saw productions of Menotti’s The Telephone, and scenes from Humperdink’s Hansel & Gretel and Strauss’s Die Fledermaus. Venue was Warners Bay Hall. May and June 1990 saw a production of Die Fledermaus conducted by John Kellaway, and directed by Frank Oakes at The Griffith Duncan Theatre. Dancers from Marie Walton-Mahon Dance Academy added to the great success of this production.

In 1991 two major seasons of Mozart were presented; “Mozart at Elizabeth’s”, a restaurant at the waterfront , hosted Bastien and Bastienne, and Menotti’s The Old Maid and the Thief; then the Mattara Festival hosted a production of The Marriage of Figaro at the Civic Theatre. Ross Fiddes was appointed Artistic Director of the company in the same year. 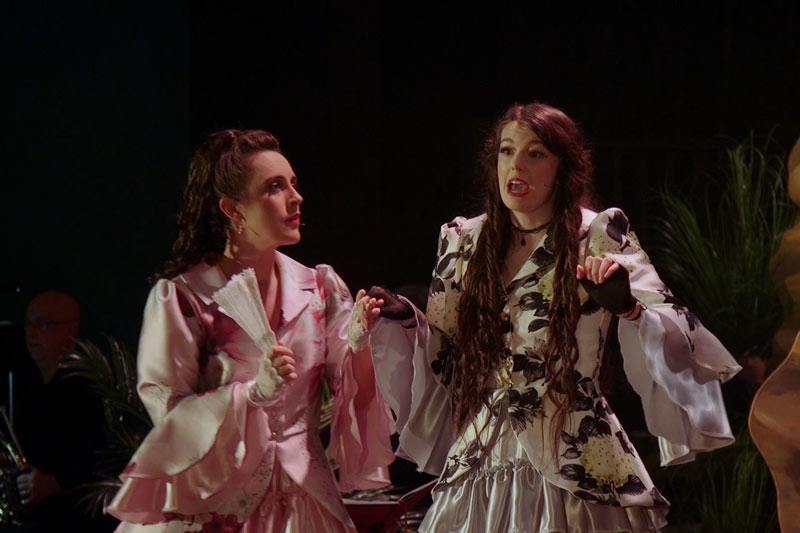 In 1992 the company presented a production of Die Fledermaus in Speers Point Park, an enterprise of Lake Macquarie City Council, billed OPERA ON THE LAKE. Conductor was Ross Fiddes, and director Frank Oakes. The date was September 13, a cold night chosen by Lake Macquarie staff, yet 3,000 people attended. In December 1992 Amahl & the Night Visitors by Menotti was produced at St. John’s Church, Cook’s Hill. It was directed by Greg Gascoine, conducted by Ross Fiddes, with The Novocastrian Arts Orchestra.

1993 was a busy year. First, in March a double bill of Master Peter’s Puppet Show by de Falla, and The Medium by Menotti at King’s Theatre. Director was Kylie Yates, conductors Ross Fiddes and Patricia White. The Medium won a CONDA for best production. In July they presented Carousel at Newcastle City Hall, directed by Ian Skilton, conducted by Kay Lane.

Later in the year the company presented Bizet’s Carmen at Newcastle’s Civic Theatre, as part of the re-opening celebrations of the theatre following a $12m refurbishment. It was conducted by Ross Fiddes and directed by John Wregg. This season of 6 performances was a sell out and the highest earning production for the company to date.

In 1994 Love Lust and Treachery, a program of solos, duets, and choruses was presented at City Hall in Newcastle, then later in the year, the massive Les Miserables at Civic Theatre.” Les Mis” had 12 sold out performances, a cast of 56, an augmented orchestra of 50 players, conducted by Ross Fiddes and directed by Matthew Lazarus-Hall.

1995 produced Oliver at Civic Theatre, directed by Wendy Leis and Kristi Street. The conductor was to be Ross Fiddes but on opening night he was struck down with appendicitis and Brett Pajnic stepped in at the last minute.

1996 was the year of Madama Butterfly at Civic Theatre, starring the lovely Jennifer Barnes, a role she was to take further with her career at Opera Australia. The conductor was Roland Peelman, Director John Wregg and used The Hunter Orchestra in the pit.

In 1997 the company presented a concert version of Ross Fiddes’ and Paul Kavanagh’s Abelard and Heloise at the Newcastle Conservatorium of Music. Paul and Ross were jointly awarded the CONDA for Outstanding Achievement in Newcastle Theatre in that year.

From 1997 the company now named Opera Hunter (a term coined by pianist Helen Smith) has been under the presidency of Mercia Buck. 1997 saw a production of The Merry Wives of Windsor by Nicolai at City Hall. Director was Andrew Coombes and conductor John Kellaway.

1998 was another busy year with concert programs; Arias and Roses at Lake Macquarie’s Awaba House in June, and Great Moments from Opera at The Highfields Azzuri Sports Club in August. 1999 was a very busy year. The Merry Widow was produced at the Griffith Duncan Theatre at Newcastle University & was directed by Fay Sharp, & conducted by Michael Bell. The Widow was played by guest American soprano Patricia Rhodes, with Andrew Coombes as Danilo, Joanna Cashin as Valencienne & John Dickeson received a CONDA ( City of Newcastle Drama Award) for his role as Baron Zeta.

After Aida is a “play-with-music” by Julian Mitchell , commissioned for The Welsh National Opera as a touring vehicle for small resources. In August Opera Hunter presented it in partnership with the University of Newcastle Drama Department at the Drama Theatre. It represents a period in the life of Verdi, exhausted after writing Aida & having retired to the country, collaborating with librettist Arrigo Boito to write his masterpiece Otello. Director for the production was Victor Emelijanov, Music Director was Mercia Buck, & the cast included James Bonnefin as Boito, Michael Saunders, Patricia Woods & Joanna Cashin.

Opera Shorts was presented in December 1999 at the Conservatorium of Music & featured Cox & Box by Burnand ( not Gilbert) & Sullivan. This was Sullivan’s first successful comic opera written five years before the first opera with libretto by Gilbert. Opera Shorts paired Cox & Box with a condensed version of Mozart’s Don Giovanni. Director for these pieces was Stewart McGowan, & Musical Director was Ian Cook.

2000 and a new millennium saw an increasing commitment to larger budgets supported by increased funding from donors , businesses and corporations. A pattern emerged of using popular musicals to support financially the mounting of opera productions. Audiences grew and were becoming two distinct categories; opera and music theatre. The company continued to be truly Hunter in it’s ability to move to many different venues.

2000 saw two major productions, Die Fledermaus by Strauss in June at The Griffith Duncan Theatre, and Mozart’s The Magic Flute in September at Newcastle City Hall.

Peter Ross’s award winning production of West Side Story was presented at Club Nova from September 6 to 22. The twin towers in New York were features in the excellent set, & were destroyed on the 11th September during the season! The production had large corporate & government financial backing & took a number of chances using the bare stage area of Club Nova (the refurbished Workers Club after the devastation of the Newcastle Earthquake.) The cast list features many well-known names in Music Theatre: Erin James, Peter Meredith, Amy Vee, Daniel Wilson, David Hinchliffe, David Berkholz, Berry Shepherd, Ron Gillett , Michael Joyce & many more. Music Director was Michael Bell. This production won the “Best Musical Production” Conda, Best Director- Peter Ross, & Best Actress in a Musical Erin James. Ken Longworth in his Review for The Newcastle Herald called it “triumphant”, “dazzling” and “superb.” 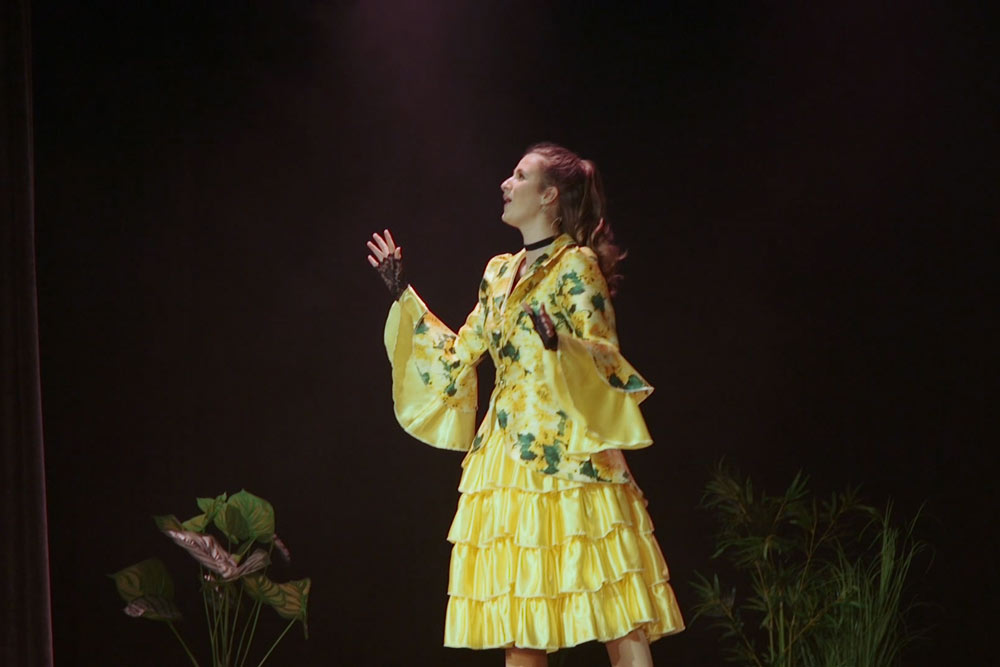 2005 Early in 2005, Ghillian Sullivan organised a performance of Figaro In the Outback at Longreach, as part of the Queensland Festival of Music & cast & crew made the very long journey in a bus from Newcastle.

In October Opera Hunter produced Mozart’s Don Giovanni at Warners Bay. Directed by Ghillian Sullivan it was set in a Fashion House in Italy in modern times. Music Director was Ian Cook.

The company faced considerable losses after the previous three years so 2006 was a year of consolidation & fund raising.

2007 In August, the company presented Andrew Lloyd Webber’s Cats at Warners Bay to considerable success. Music Director was Ross Fiddes, & Director, Designer & Choreographer was Samantha Fiddes. The large cast included many who have gone on to big careers in the industry: Ali Calder, Declan Egan, Jake Nielsen, Wendy Ratcliffe, Alison Cox, Owen Elsley, Louise Thornton, Miranda Hayman. This production was a major leap forward financially for the company, providing a surplus which enabled planning for an operatic season in 2008.

2008 In May Opera Hunter presented a season of Handel’s Julius Caesar at The Hunter Theatre in Broadmeadow. This was a new milestone for the company achieving a very high standard of musicianship. The amazing Jennifer Barnes stepped in at six weeks notice to learn the lead role of Cleopatra. Male Alto Steven McLean played Caesar, Michael Saunders sang Ptolemy, Joanna Andrew was Cornelia, Paul Morris was her son Sextus, James Bonnefin was Achillus & David Capewell was Nirenus. Director & Designer was Jason King, & Music Director was Susan Hart. SEE REVIEW

2009 Miss Saigon. This production opened at Cessnock Performing Arts Centre May 1st -3rd, then played at Warners Bay 8th to 17th May. It was directed by Jason King, with Music Direction by Susan Hart, & Choreography by Jade Hillard. Cast included Josephine Tam & Louise Thornton as Kim, Nicholas Stabler as Chris, Andrew Godbold played the Engineer, with Paul Chegwidden & Jacquelyn Brown as John & Ellen, Peter Bird as Thuy, & Sarah Taylor as Gigi (shared with Louise Thornton) & a 7 year old Giles Jeffery as Tam. There was a large chorus & orchestra, & outstanding sound design by Scott Travis who worked with Opera Hunter for many years.